East Rock Klezmer was born out of a shared love of traditional Jewish music. ERK strives to remain true to the "old-world" Eastern European sound, while honoring the musical sensibilities of contemporary audiences. One can hear ERK at private simchas and local venues in the Greater New Haven area. During the school year, East Rock Klezmer occasionally appears in functions at Yale University, playing in services at the Divinity School's Marquand Chapel, and at parties at the Slifka Center and the Botanical Gardens. During the summer, the band frequents farmers markets and the benches in East Rock Park, for which the band was named. East Rock Klezmer creates a traditional Jewish sound with its instrumentation of clarinet, accordion or tsimbl, fiddle, and poike. Our repertory comes largely from the Eastern European tour de forces such as Beregovski, Kostakowsky, and Belf, as well as the American collections of Tarras and Beckerman. We enjoy playing for all who are open to hear us! Klezmer has the unique ability to express the gamut of human emotions; we hope to inspire dancing, singing, laughing, and⁄or crying through our music. Tel: (203) 745-4610. Web: www.eastrockklezmer.com. (James Kessler)

Based in Brooklyn, NY, Eden is a new creative force exploding on to the Jewish Rock scene. Their soon to be released debut record "Tree of Life" is an eclectic mix of alternative and hard rock following the musical influences of bands like Incubus, Creed and Pearl Jam. The message behind the music promotes spiritual growth, acceptance of fellow Man, and closeness to Hashem. Tel: (718) 757-7590. Web: www.edenmusic.net.

Eden Mi Qedem is the cutting edge in simcha-music, offering the highest quality mix of Jewish and secular music with traditional sensitivity and modern appeal. We specialize in events with diverse crowds and mixed tastes and ages, being possibly the only band that plays Chassidic, Classic Rock, authentic Mizrahi(Sephardic), Israeli, and Jazz, with the same passion and skill. Although we are based in Jerusalem Israel, we also perform at simchas and festivals internationally. We invite you to browse our website, watch our videos, and hear the music samples. Tel: 972-545-224-385. Web: www.edenmiqedem.com.

The Mike Eisenstadt Band is one of the most in-demand party groups in the southeast. The band is based in Florida, and has traveled extensively in the eastern US. Although it is often referred to as a klezmer band, the music that is performed goes beyond klezmer, in an eclectic mix of Hebrew, Yiddish, Israeli, Rumanian, old, new, traditional, and not-so-traditional. The band plays unique adaptations of Jewish standards, utilizing a variety of styles, including latin, funk, swing, jazz, smooth, and whatever else may seem right at the time! The band has as much fun performing as the audience does listening, and concerts have been described as "just like a Jewish wedding!" The band's latest CD, Chazak, was released in early 2005 to excellent reviews around the US. Chazak represents all sides of the band, from traditional to original, all done with love and ruach (spirit) from Mike, who passed away in September, 2005. The band is led by Kevin Frye, the group's trumpeter of 15 years. Kevin strives to continue the tradition of excellence that Mike instilled for so many years. Tel: (813) 789-5058. Web: www.eisenstadtband.com. MySpace: www.myspace.com/eisenstadtband. (Kevin Frye)

Ellis Island Old World Folk Band (San Francisco) has played a pioneering role in reviving klezmer music in the San Francisco Bay Area and has been delighting audiences for two decades with its performances. The group is truly an Old World Folk Band. Its repertoire encompasses a wide variety of traditional music from such countries as Russia, Italy and Greece. Ellis Island has been featured in concerts, festivals, delicatessens, community centers and colleges and has performed for anniversaries, memorial services, circumcisions, baby namings and, of course, weddings, bar mitzvahs and bat mitzvahs throughout Northern California. The band includes Jim Rebhan, accordionist, percussionist, and person about the ethnic mallet, extraordinaire. Tel: 510 529-8753. Web: www.musikers.com. (Jim Rebhan)

Ellis Island Band (Los Angeles). Founded in the 1970's by Barry Fisher and Stuart Brotman, now of Brave Old World, Ellis Island is Los Angeles' oldest klezmer band, and has played the Krakow (Poland) Jewish Festival with the Klezmatics and Brave Old World. EBI has been featured in television and films, including Meyer Lansky's wedding in Universal Pictures' Mobster, and everything from Nashville's Opryland to a film star's wedding in an Umbrian Italian villa. Recently it put on a major Los Angeles concert of the "Mexican Revolution, Pancho Villa and the Jews" combined with a large Mariachi band, which was based on extensive historical and musical research. It has been the featured segment on a PBS U.S. National broadcast of The NewsHour with Jim Lehrer, and an upcoming PBS half-hour special. Crossover play is a favorite of the EIB, particularly with Romani ("Gypsy") bands. It has played for many L.A. Romani functions and has played several concerts with Romani groups. Fax: (310) 557-0770; Tel: (310) 557-1077; 1888 Century Park East, Suite 1750, Los Angeles, California 90067 U.S.A. (Barry Fisher)

Emunah, based in London, UK, mix the best of Jewish music from around the world with beats, rhymes and bass. Their exposive live sets always get the crowds dancing, mixing together Klezmer, middle eastern and oriental melodies over dancehall, hip hop, breaks, and drum & bass. The band are in the midst of a never-ending tour that has taken them all over the UK and beyond with their unique fusion of live instruments, DJ skills and dynamic vocals. Contact: Dan 0044-7967-207474, Web: www.emunahmusic.com, www.myspace.com/emunahmusic. (Daniel Silverstein)

Ensemble DRAj: Manuela Weichenrieder (vocal), Ralf Kaupenjohann (accordion), Ludger Schmidt (violoncello) plays "Lieder aus den Ghettos" CD with the same title by Ethno Art Ruhr published (April 2000, with the singer Anette Krüger). Our music is not authentical in the way to play in jewish traditions. But we use this melodies from our (the european) culture for our own arrangements with space for improvisations. More you will read soon in our CD-booklet. Web: www.draj.de. Contact: Ensemble DRAj c/o Augemus Musikverlag, Büro Essen Wuppertaler Str. 424 b, D-45259 Essen. Tel: 0201 / 46 72 76. (Ralf Kaupenjohann)

Ensemble Klesmer Wien plays traditional music of the east European Jews, Klezmer music, Jewish and Hasidic songs. The trio's interpretations are based upon the traditional performance practice of the 1st half of the 20th century. Ensemble Klesmer Wien was founded in 1989 by Leon Pollak and Joshua Horowitz. Instrumentation: Leon Pollak, Violin, Voice; Mario Koutev, Accordion; Michael Preuschl, Contrabass. The CD "Ensemble Klesmer live in Prag" can be ordered from Extraplatte (Bestell-Nr. EX-317-2/M/26). Two of the pieces of the CD can be heard via internet: Fun der Khupe and Gassn-Nign. Contact: Leon Pollak, Taborstr. 63/14, A-1020 Wien, Austria; Tel./Fax.: +43 1 2163058. Please check out our home page at: www.ensembleklesmerwien.at.tt. (Leon Pollak) 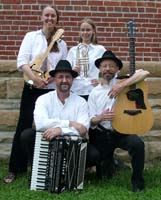 The Epstein Brothers were the reigning zeydes and great-zeydes of Jewish music. The Satmar's favorite band in the Sixties finally retired to Florida in the Seventies with their friends, and kept playing through the '90s. You can still catch the movie, A Tickle in the Heart, produced by Stefan Schwietert in 1996. Even better, there are a host of recent recordings by the band that capture the magic: Kings of Freylekh Land (1995), Zeydes un Eyniklekh (with Joel Rubin, 1995), and their cassette, Klezmer Music II (1996). The most recent recording is a remastered double-CD of material going back over their entire career, Epstein Brothers / Volumes III - IV.

Esther's Klezmer Band is an all woman band based in Santa Cruz, California. We play both traditional and original Klezmer tunes with their own spicy blend. Instrumentation includes violin, mandolin, clarinet, accordion and stand-up bass. We are available for celebrations and festivals. Tel: 831 427-3939. (Hannah Good)

The music of Eve's Women (נשות חוה Neshot Chava ), based in Israel, can be described as originating in traditional Jewish styles from East and West and then absorbing the multi-cultural influences of Israeli society which bring in the Middle Eastern, Latin, African and North American jazz variations. The heart of the all female band is the clarinet which is played by Israel's top clarinetist, Orit Orbach. With a extensive background in the classical field, she's played solo clarinet and first clarinet with some of the world's top symphony orchestras including the Israel Philharmonic, Boston Symphony and the Jerusalem and Haifa Symphony Orchestras. Also in the band are bassist Dana Eviatar, electric pianist Orit Dukler and percussionist Michal Rahat, who play and perform in Israel with the best rock, Jazz, and ethnic artists. Video: www.youtube.com/watch?v=x8RiMffHXuA. Web: www.myspace.com/neshothava. (Orit Dukler)

The Extreme Klezmer Makeover, Los Angeles, CA. Four musicians with diverse musical backgrounds celebrate the joy of the Eastern European tradition and the joy creating new klezmer sounds as they absorb the musical influences around four musicians living in the metropolis of Los Angeles. Get ready for some fun surprises! Tel: 310-474-1123. Web: www.lapidusmusic.com. (Joellen Lapidus)

Ezekiel's Wheels, Cambridge, MA. We love klezmer. Alums of Yarmulkazi, the Eastman School of Music, and the Black Sea Quartet gather to play the music for concerts, parties, dances, and festivals. Drop us a line to find out more! Web: https://www.ewklezmer.com. (Nathaniel Seelen)