Los Angeles Community Klezmer Band, Los Angeles, CA, USA, meets for weekend practices, usually on the west side of Los Angeles and plays at community events, public libraries, etc. We have done over 35 gigs since 2004. We currently have 16 musicians and singers. We do tradional Klezmer, Yiddish show tunes, Ladino songs and bit of everything else. At this time we would especially welcome trombone, tuba, baritone sax, to join us. There is also a spin off group limited to 8–10 participants with the name "Beyond Chutzpah".… E-mail LA Community Klezmer Band. (Ken Feder)

The Lama Lo! ("Why Not!") Ensemble, founded in 1999 in Jerusalem, is comprised of professional musicians from the former Soviet Union. They present a new view of traditional Jewish folklore by blending traditional klezmer music with elements of classical, jazz and Middle Eastern ethnic music, thus forming the bright individual and creative manner of the group. One can hear free interpretations of well-known popular melodies (niguns and freilaches) as well as original music - in performances of the Ensemble, which consists of Roman Kekhman, virtuoso clarnetist (soloist); Yevgeniy Lyublin, Trumpet; Yaaqov Entin, Violin & Bass; and Anatoly Magdalinsky, Drums. Original music is written by composer, arranger and pianist Yuri Povolotsky. The band is directed by Bella Kresin. In 1999 "Omanut Le - Am" gave the group its highest mark, opening the way to numerous concerts in the best music venues in Israel. Tel-Fax: 972-2-6765565, Mobile: 972-54-292839. Web: www.kleizmer.com. E-mail Lama Lo!. (Bella Kresin).

Landsman Klezmer is now known as the Klezphonics.

L'Chaim Klezmer Band has been in existence since 1996. L'Chaim features Alex Newman (myself) on clarinet, sax, and Russian vocals; Ron Klein on trombone, English & Yiddish vocals; Ray Lansberg on violin; David Auerbach on tuba; Phil Sterling on banjo; and Ruthi Magedesh on Yiddish, Israeli, English, and French vocals, hand-held percussion, and beli-dancing. We have used Bill Maginnes on drums. We are based out of the Berkeley/Oakland California area, and have played all over the San Francisco Bay area. We play Eastern European Klezmer, Israeli, Russian, and Central European Caberet music. We have played at Bar Mitzvahs, Bat Mitzvahs, weddings, anniversaries, potlitcal events, public and private parties. Tel: - (925) 335-2647. E-mail L'Chaim Klezmer Band. (Alex Newman)

Lerner Moguilevsky Dúo are a Klezmer duo from Argentina (Marcelo Moguilevsky, clarinet & flutes - César Lerner, piano & accordion ). Their first album was called "Klezmer en Buenos Aires". Their second album is "Basavilbaso", which is the name for one of the old argentine colonies which Jewish inmigrants established at the begining of this century. In 2000 they recorded "Shtil", followed by a live recording, Sobreviviente, in 2003. They do an intensely powerful live performance. The klezmershack has a short review of a 2002 concert by David Julian Gray. "We are one of the few Klezmer duos in South America, and are trying to show our music in other countries. If you are interested in receiving our material (CD, video, photos, pressbook), please, contact us and we'll send it to you." Write: Besares 1951 (1429) Cap. Fed., Buenos Aires, Argentina. Tel: (54-11) 4772-3764 / (54-11) 4702-6333. Web: www.klezmerbuenosaires.com/. E-mail Lerner Moguilevsky Dúo. (César Lerner)

The Lenka Lichtenberg Group, based in Toronto, Canada, performs Yiddish world music. Lenka Lichtenberg is a Canadian, Prague-born singer, composer, arranger, producer, ethnomusicologist, cantorial soloist and a bandleader of the Yiddish swing-klez band Sisters of Sheynville. She performs around the world, as a solo or with various groups. Her 2006 CD Pashtes [simplicity] involved setting to music poems by the Yiddish poet Simcha Simchovitch. On her latest CD Fray (2010), she again sets to music a number of modern poems, while creating a fresh new sound through her collaboration with several internationally renown world music artists. As a cantorial singer, Lenka is in the process of recording liturgy in dozens of Czech and Moravian synagogues, as a part of a project “Songs for the Breathing Walls”. Volume I will be released in 2011. Tel: 416-256-2947. Web: www.lenkalichtenberg.com. E-mail Lenka Lichtenberg. (Lenka Lichtenberg)

We are The Liberty Balalakia Ensemble. Playing authentic Russian instruments, such as balalaikas and domras, we recreate the melodies of Slavic Europe. Guitars, fiddles, accordians, clarinets, and vocals round out the ensemble. We also feature Israeli, Klezmer, and Scandinavian music as well as an occasional American tune. The Ensemble is a community orchestra based in Liberty, Maine. We are available for concerts, dances, cultural events, weddings, Bar Mitzvahs and informal gatherings. Anyone interested in making music with us is welcome. Contact Rachel Hoar for more information at (207) 622-3463. Web: www.midcoast.com/~martucci/libal/. E-mail Liberty Balalaika. (Rachel Hoar) 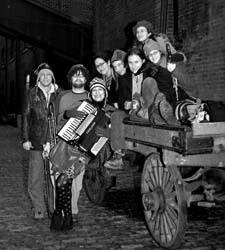 The Lithuanian Empire, Toronto, ON, Canada. The Grand Duchy of Lithuania was a multinational state which initially expanded by largely peaceful means, into the power vacuum left by the collapse of Mongol Power. The many ethnic and religious populations (Catholic Lithuanians and Poles, Orthodox and Uniate Eastern Slavs, Jews, Armenians, Germans, etc.) contributed to a diverse cultural and political life. The newly revived Lithuanian Empire emulates its mother land. Its aim is to quietly infiltrate with imperial tendrils into other klezmer lands, all the while embracing other forms of music, from punk rock to Latin funk. Its tolerance of diversity stems from its unique composition, with members from East, West, and Central Canada; the Appalachian Mountains, and New England. The Lithuanian Empire players’ religious affiliations span an enormous spectrum, from Orthodox Judaism, to Agnostic Taoism, to Frank Zappaism, to name a few. Web: www.thelithuanianempire.com. E-mail The Lithuanian Empire. (Becky Wexler)

Litvakus is a klezmer / Eastern European band based in Brooklyn, New York, led by Dmitri Zisl Slepovitch. The band brings back to life and explores often overlooked Belarusian and Litvak (Belarusian-Lithuanian) Jewish musical heritage— through the prism of their research of the North-Eastern Europe’s music and the wide variety of their own cultural backgrounds, as well as their original compositions in Yiddish, Russian, Belarusian, and other languages. Litvakus first performed as the critically acclaimed stage band from the National Yiddish Theatre’s production of Gimpel Tam, in the fall of 2008. It is performing together with Michael Alpert in the Folksbiene's production of Dmitri Slepovitch's Traveling the Yiddishland musical story and collaborates with Daniella Rabbani in song and theater programs. Web: litvakus.com. E-mail Litvakus. (Dmitri Slepovitch)

LiveJewishMusic.com, based in Houston, is the only Orthodox Jewish band in Texas. Performing nationwide and can perform as a one-man-band, A Capella groups and full orchestra. Check our website for audio and video samples as well as Free Jewish sheet music database. Tel: 832-303-1KOL (1565). Web: www.livejewishmusic.com. E-mail liveJewishmusic.com. (Avraham Solomon)

My band has been calling itself "the Lokshen quartet" for a long while; but now we generally go by my name alone. I have been working, recording and touring extensively Italy (and sometimes Europe, and even a little peek at Los Angeles once) since the mid-nineties; and have meddled with manyh things, ranging from klezmer and yiddish song to Italian synagogue repertoire. Tel: +39 3473425957. Web: www.enricofink.com. E-mail Lokshen Quartet. (Enrico Fink)

The London Klezmer Quartet is a dynamic group of performers much in demand on the UK folk, world and pop music scenes. Their deep understanding of klezmer, the celebratory and soulful music of Eastern European Jews, is reflected in exuberant, passionate and accomplished performances that captivate audiences of all ages and backgrounds. Tel: + 44 (0)782 551 0881. Web: londonklezmerquartet.com. E-mail London Klezmer Quartet.

Since Lox & Vodka was founded in 1984, we have performed lively and spirit filled Klezmer, Israeli, Yiddish and Russian music. Our hora is always action-packed and, when we teach a room full of appreciative listeners to folk dance, the atmosphere is electric! The musicians are dedicated to the continuation of this wonderfully soulful, ethnic music. We play much of it with traditional interpretations, but we have also adopted some American and other ethnic musical flavors which have created a wonderful rapport with our varied audiences. In addition, we have composed original klezmer and Jewish pieces which can be heard on our CDs: Heavy Shtetl and Celebrate Shabbat. And for those interested in including a more contemporary sound at their simcha, we perform great Rock & Roll, Mo'town, Big Band and more. We lead a rousing simcha hora around the guest(s) of honor and teach fun and simple folk dances, enjoyed by one and all. For more information, call (202) 966-7270. Web: www.loxvodka.com. E-mail Lox & Vodka. (Caron Dale)

Uniquely American, Uniquely Jewish. That's Lucky Break, a Milwaukee, WI, band of veteran bluegrass singers and instrumentalists who combine the stark beauty of Appalachian music with Shabbat Z'mirot (Sabbath songs). We are a roots-oriented bluegrass band that brings a traditional and expressive voice to the genre while providing a fresh approach to songs of the Sabbath. Once you hear the rockabilly influence on "Shalom Aleichem" and the Celtic flavor of "Tzur Mishelo" you'll never think of Shabbat Z'mirot the same way again.mLucky Break members have performed with some of the top names in bluegrass. The all-acoustic band is comprised of banjo, dobro, mandolin, guitar, and string bass. Lead singer Jerry Wicentowski is acknowledged as one of the great voices in bluegrass, and we're known for our solo, duet, and trio vocals. We have achieved the acclaim of Midwestern US audiences and are now expanding our performances from coast to coast. Web: www.luckybreak.us. Check our web page for MP3s, more band background, and contact information. E-mail Lucky Break. (Marc Edelstein)

Louisa Lyne & di Yiddishe Kapelye, Malmö, Sverige. Yiddish—a language of darkness and misery, but also of passion and joy! All aspects of life are present in its beautiful but long-forgotten songs and poetry. Singer Louisa Lyne injects new life into this well-hidden musical treasure. With captivating warmth and genuine feeling she welcomes us into the world of her music. We are taken on an inspiring journey through old and new, melancholy and laughter—an unforgettable musical experience. Tel: +46 707 428260. Web: www.louisalyne.com. E-mail Louisa Lyne. (Edin Bahtijaragic)